Exclusive Interview with Valentino Rossi in first time with Yamaha 2013

Exclusive interview with Valentino Rossi in Jakarta 2013
On January 25, 2013 after Launched  new logo of Yamaha Indonesia “Semakin di depan” , we have a chance to did interview with the nine times world champion time Valentino Rossi  and it’s more special because it was first time the Italian comeback to “Blue” with his baby M1 for this year and 2013. 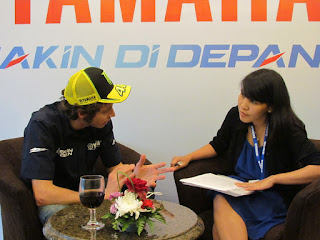 Nine minute Yamaha give to us make this interview very interesting because he was answer with very lovable smile like always and with his spirit who always make everybody around him feel very warm, and here is  what Valentino Rossi said to all his fans around the world :

Welcome to Indonesia Valentino Rossi,  this is an honor to have you back in Indonesia,  our first question is  about general thing.
Almost people said MotoGP is Valentino Rossi , what do you think about it ?
VR : I think that I’m an icon of MotoGP because I won a lot and also I won on the period that the race is very fun to follow so I think I have a lot of fun around the world, who start follow MotoGP because I had a great battle with the   different rivals. So because of the reason  I still feel a lot a fun also after a two years difficult season. But I know I ‘m become older…not young anymore and that’s a lot of young riders growing up and they  also more faster and more competitive but I’m very happy that I’m here in MotoGP (Video Valentino Rossi interview)

Just like you said lot of young riders so who will be the biggest threat for you beside Jorge Lorenzo and Dani Pedrosa ?
VR : For me Marc marqueze will be the rookie… the faster rookie because he is very young and he’s very strong and he also won a lot of races in his career already and he will race for the faster Honda team so he will have the maximum technical support. And also andrea Iannone arrive but for Iannone it will more hard with Ducati beause it is a difficult bike but I think he has a talent to ride well in MotoGP

VR : I have very good feeling because I try the M1 on the wet and in the wet I’m strong, and also with Ducati but I feel ride better with Yamaha even under the water. I feel very good in the bike, the bike is similar in 2010 but it’s faster in speed and acceleration because it’s 1000 cc. I think Yamaha also work  very much in acceleration from the corner. For the race is very similar so we have to work but already the M1 in the top level.

So is still your baby?
VR : Yes for sure (Laughing..and his face was very happy)

Last two years it was very difficult season because you only got podium three times, so on this year when you get the podium, will you have a unique celebration again… We really really miss that?
VR : (Laughing…) For me you can do some special celebration when you win the race, podium is not enough, so when we get the victory we can try to imagine we can try some special last lap

As we knew the rule for aggressive rider will different for this years, what’s your opinion of this revised rule,  is it will going to improve this sport or it will not?
VR : For me it’s a dangerous sport, so is good to have some rule, but motorcycle racing in all history  is a hard sport, you have to fight 100% with your rival in the last lap, so maybe you can touch the other guy, it’s important to do that (Push hard) but don’t to be too crazy but anyway is art way in the last fight between the riders is great.

We talk about CRT, When the CRT coming to MotoGP lot of opinon from riders and fans who not agreed with this decision and you the one who agreed and think it will good for the future of MotoGP due the crisis economy and  at the of 2012 they finished much much closer , do you think this will continue for this season?
VR : In the next season something will change because I think the future of MotoGP is the bike in the middle between the full prototype and the CRT, is something in the middle and I think Honda and  Yamaha will start on this way because unfortunately now the worldwide economic situation is bad so we can’t continue to race with the same bike like 5 years ago because it’s too expensive. And we need agree the minimum of the bike on the track is 20 bike, so if we  don’t have CRT last year, we are just have 12 bike and it’s very sad. So I think in the future will be something in the middle between the full prototype and the CRT

What you suggest for circuit Sentul for make them be hosted of MotoGP again ?
VR : For me it’s very important because if you see Malaysia, MotoGp grow enough, especially because of Sepang. That’s a great circuit, the one of my favorite circuit, so I think that Indonesia have it, will be great track because a lot of passion from people and a lot fans of MotoGP in Indonesia. So it could be good track and it’s very important to support  for the young riders.

When you have gift from fans around the world in every race you are, what are you did with all of that? Are you have special place in Tavullia to put them?
VR : Yeah yeah I have  big place where I store all my stuff from my career and all the lether, some gloves, some bikes and a lot of gift from my fans

And the last Valentino Rossi say to all his fans for around the world especially Indonesian fans
VR : Ciao from Valentino to all Indonesian fans and thanks a lot for the passion and the support, I’m very happy to be back here in Indonesia with the Yamaha, and I hope you will enjoy MotoGP this season. Ciao 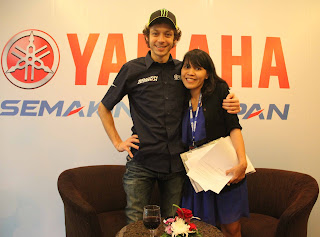 I really grateful to gave this incredible chance, really best moment in my life. Thank you very much for www.moto.it for your trushed, Yamaha Italy for your kind help to made this moment come true and the special one for Yamaha Indonesia for your awesome two days with Valentino Rossi.


You can find this exclusive interview in Italian language on www.moto.it --> Valentino Rossi: "Sono pronto a tornare competitivo"

dsulistiyo
I love all about Valentino Rossi. He's not only my Idol, he's my spirit too